This page collects the various movies I've made, most being entries in short film competition The DV Challenge. New stuff up top.

I wanted to try an accent, and figured if I didn't give myself the chance no one else would. It was kind of fun.

There are no higher quality versions of this DVC 16 entry available for download, since Youtube's HD encodes are more than adequate, and the chroma keys I pulled here are absolute trash, definitely not worth an excessively high bitrate. Interesting point, the visual effects for this were done in about fourteen hours, a rush job if ever there was one, and once the deadline passed I was able to go back and experiment. I ended up figuring out how to pull cleaner mattes in fewer steps (immaculate edges, not at all what I'd have expected from a point-and-shoot digital still camera recording H.264 video), but by then the contest was over, and I was sick of the movie. I still am, so don't get your hopes up for a fancier version of this. You'll find a DVi discussion thread, as usual, where many more details are offered of the film's production.

As a little something extra, please do enjoy a version of the movie sent straight out of my NLE, cuts only, to get a sense of what this little camera (a Cybershot T500) and a healthy dose of post production can do. Or fail to do, as the case may be:

Finally, of course, a selection of photos from behind the scenes, featuring the construction of the cave entrance and rock altar (the floor of which was constructed from a piece of the first set's wall), along with shots of the lantern mount and rain rig we jury rigged, and finally an overall view of the basement set, taken after the day's shooting was over: 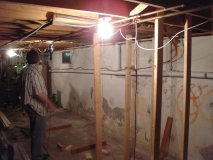 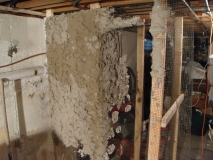 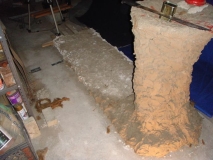 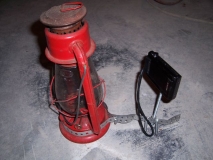 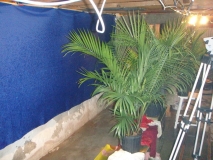 Threw this sucker together in less than twelve hours for DVC 14. Hit the feedback thread for more details.

My submission to DVC 12. Took me six damn runs of this competition to produce a film after "That Wouldn't Happen", and I'm sorta-kinda-almost-but-not-really proud of this one for a change. The end product, for interested parties, was indeed discussed(ing?).

Two Guys in the Woods by a River

The directorial work of one Michael Fossenkemper, I did have a role in Two Guys, so it's listed here with the rest of the stuff I've done. We entered this as a team in DVC 7, and did rather well if I may say so myself. And I may.

The reality of a setting December sun dictated that there wouldn't be time to set up all of the shots originally planned, and not much of the river in the title is ever seen. Keep an eye out once the characters reach the woods and you might see just a bit of it.

Feel free to browse the DVI thread covering the film's production, and don't miss out on all the behind the scenes material we shot.

My second DV Challenge entry. It's confusing. There's a guy living in a little wooden shack on the moon. That's the best I can explain. Like the others, there was chit. Some chat, too. Fifty-fifty, really.

Music graciously provided by Aamu. He does good stuff, and I'm eternally grateful that he allowed me to attach it to my ridiculous idea.

The photo of the moon comes courtesy of UC Regents/Lick Observatory: http://www.ucolick.org/

Finally, the wonderful photograph of the stars comes to you from Chris Schur: http://www.schursastrophotography.com/

A look behind the scenes:

This is from way back in March of 2006, for the fifth DVC. The first time I'd entered the contest and actually produced a film, it was also--surprise, surprise--my first finished movie. I'd never gone through the whole thing, script to set to screen, before I did this, and the results are predictable.

It's horrendous. Don't watch it.

If you want to learn more about the creation of the movie you just promised you wouldn't watch, a detailed discussion of the films flaws can be found here.

The earliest movie I can remember shooting. Screwed up the audio and never got around to fixing it; could have worked, maybe, with some sound effects and a little music. The actor featured is a friend of mine; go make fun of this guy about the stupid movie he was in, fighting off lawn chairs. He'll like that, I'm sure.