An Avisynth 2.5.x scaling helper script, aimed at simplifying the process of converting one arbitrary input size and pixel aspect ratio to another by either cropping to fit or padding to produce letter, pillar, or windowboxed output. The only three vitally important things you must do to make it work as expected are:
For example, to scale a progressive, anamorphic input clip to square pixel 1080p output, use

Full documentation is present in the script itself, including a Basic Use section that should make it relatively easy to get started. If you have trouble, or are unfamiliar with Avisynth, you may wish to see what you can gain from this tutorial covering the use of this script: SD video to HD dimensions with Avisynth

Interlaced input:
QTGMC (by default; other deinterlacers are also supported)


Click any thumbnail to see the full size image; please note these are merely samples of output sizes and shapes, not quality level. They're only JPEGs, after all. 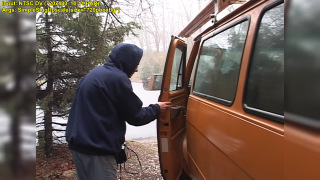 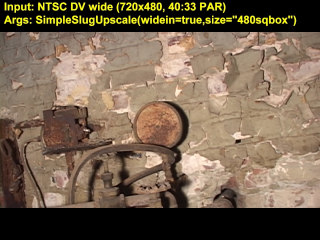 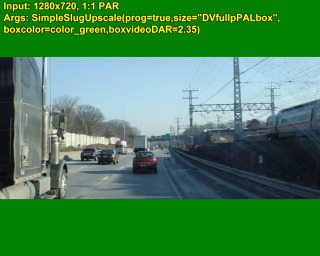 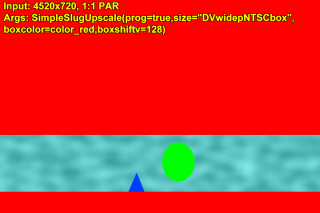 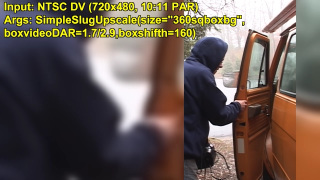 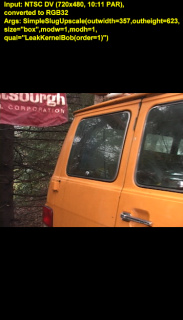 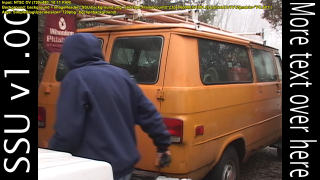 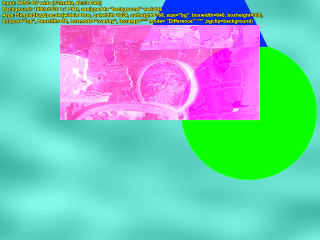 1.02 - November 15th, 2010 - Corrected oversight with bwrequest/bhrequest in box function (thanks to Nico Feragnoli for the note), updated PAL DV pixel aspect ratios (found these in henryho_hk's resizing script, realized they work better), changed 0s in PARout and DARout checks to 0.0, for consistency's sake, clarified grammar of step 3 in Basic Use, improved interlacing check for shtrclp.

0.9 - July 20th, 2010 - Added DARout parameter, and associated logic, to allow auto generation of custom output dimensions when only some information is known, added boxvideoDAR to let users change shape of center section in "box" or "boxbg" modes, added boxshifth and boxshiftv for shifting center frame up and down or back and forth within overall frame, changed modw default to 16.0, changed modh default to 8.0 for "360sq" and all 1080 presets, 16.0 for everything else, simplified qual logic, redesigned resize condition to allow for older versions of Avisynth, removed two Asserts (unnecessary since hshift and vshift are silently rounded to mod 4 and 2, respectively), removed final BilinearResize in Box function as new design generates proper sizes without it, changed boxbgblur to float, wrapped outwidth, outheight, modw and modh in Float function (not strictly required, but I feel safer explicitly casting my variables), changed Round for outwidth, outheight, ctrwidth, and ctrheight to Ceil to allow mod values greater than the requested output dimension to function correctly, changed gausswidth in Box function to derive from outwidth instead of inwidthf, removed unnecessary Round of outwidth and outheight after crop argument calculation in main function, removed redundant "return" statement for both functions, passed inwidthf and inheightf straight into Box function from main instead of recalculating them, removed several unnecessary order-of-operations parentheses throughout script, added extra conditions to 'outwidth' check to improve reliability.

0.7h - April 8th, 2010 - Added 'widein' option for working with anamorphic DV input, changed syntax of resize to use named arguments (allows Bicubic to work properly), corrected glaring error in interlaced output processing (thanks to Gavino and 2Bdecided of Doom9 for setting me straight with this), moved DV-size Assert to the top, where it belongs.

WARNING! Versions 0.7g and earlier of SimpleSlugUpscale produce incorrect interlaced output, and are only provided for educational purposes.

0.2 - March 4th, 2010 - Added 1440 modes (thanks to Per Magne Handegård for the reminder), renamed existing 1080 options to better reflect their output, cleaned up some unnecessary checks.